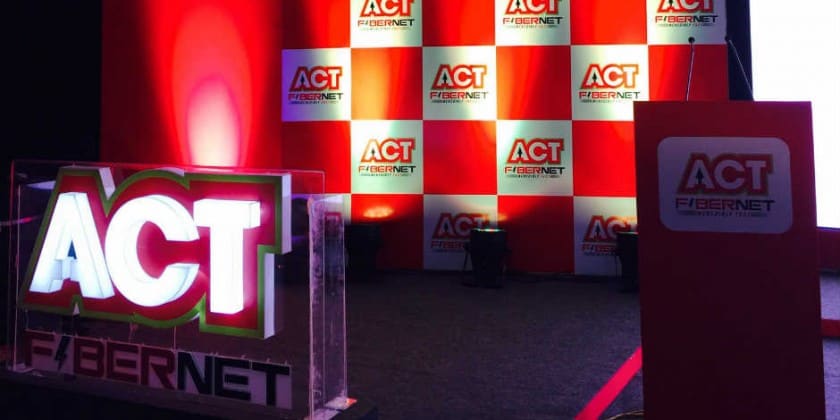 Launched in the presence of K. Taraka Rama Rao, Minister for IT, Municipal Administration and Urban Development and Industries (MAUD), ACT Fibernet is the first player in the Indian internet market to GIGA enable an entire Indian city.

Riding on the strength of being the largest non-telco ISP, ACT Fibernet has the best global fiber optic technology and is now bringing world class experience with futuristic speeds to Indian consumers.

When the average internet speeds in India is 2.5 Mbps, ACT Fibernet’s 1 Gbps launch will leapfrog Hyderabad internet speeds to 400x national average. Very few cities across the world can boast as being ‘Giga enabled’, certainly not at this scale. This launch places Hyderabad in league of select cities in the world that can boast of such futuristic technology. Giga speeds will allow downloads from the internet faster than transferring data from a USB drive.

ACT Fibernet is the largest broadband provider in twin cities of Hyderabad and Secunderabad with over 65% market share. Growing at an incredible rate, ACT Fibernet is known to be a speed pioneer in the broadband industry; this launch will not only provide internet connections at incredibly high speeds, but will disrupt and lead technological growth in the country.

Speaking on the launch Bala Malladi, CEO, ACT Fibernet said, “With our citizens and the government moving towards the Digital India movement, high speed internet is the need of the hour. With the launch of our 1 Gbps broadband internet service, it gives me immense pride to turn this dream into reality. The city of Hyderabad is apt for our maiden launch as it has some of the best technology brands, educational institutions and a vibrant economy.”

Malladi further added, “We are confident this product will transform the way internet is now being consumed at large and this will fast track the government’s newest target to connect all its 23 million Telangana residents through the Internet by 2018”.

Speaking at the launch, Honourable Minister for IT, Municipal Administration and Urban development and Industries, Shri. K. Taraka Rama Rao said, “I am extremely pleased to be present here and witness the historic launch of 1Gbps broadband internet service for an entire city in the country. It is my vision to connect our residents through high speed internet and I am sure this product from ACT Fibernet will further help fulfil my vision of making Telangana a tech and digitally advanced hub.”

India is the second largest market globally with internet connectivity reaching over 400 million people. With the government’s constant and fervent efforts to internet enable cities, internet penetration is set to reach over 600 million users by 2020. Additionally, the government’s recent announcement to boost high-speed broadband via optic Fiber to 1,50,000 gram Panchayats will further receive support through initiatives such as ACT Fibernet’s and its contribution to the country’s digital growth.

ACT Fibernet’s 1 Gbps wired internet service is slated to soon be available in the 11 cities the company has presence in. The product is currently available in Hyderabad for INR 5999 per month, 1 Gbps , 1TB FUP.