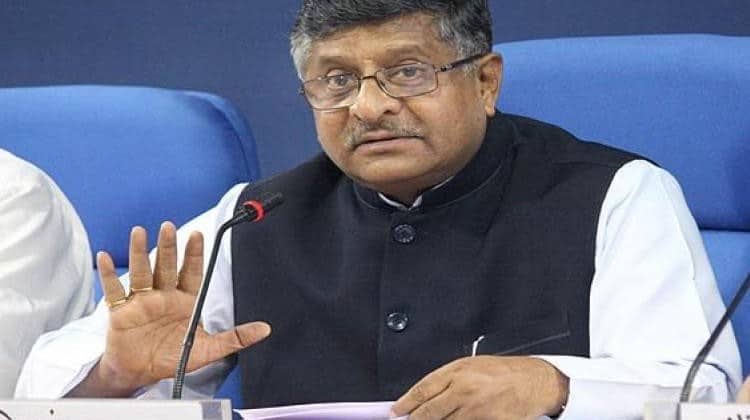 The Union Minister for Communications, Law & Justice and Electronics & Information Technology, Ravi Shankar Prasad has said that Mobile Security should be a National Priority as the mobile handset has become an important tool for all online activities.

The Minister was addressing a gathering after launching a Web Portal called ‘Central Equipment Identity Register (CEIR)’ for the customers of Delhi to facilitate blocking and tracing of Stolen/Lost Mobile Phones in Delhi. The Lt. Governor of NCT of Delhi, Anil Baijal, the Secretary, Telecom and the Chairman, Digital Communications Commission, Anshu Prakash, the Commissioner of Delhi Police, Amulya Patnaik, the Member (Technology), Digital Communications Commission, S K Gupta were also present on the occasion.

In another important announcement Union Minister Prasad said that Government has decided to give 5G Spectrum for a trial to all operators in the country. This means that the government has allowed all applicants, including China’s Huawei Technologies Co. Ltd, to participate in 5G trials.

It is believed that the DoT will organize a meeting with all telecom equipment vendors to discuss the timeline and other procedures to start trials. DoT is looking at allocating the trial spectrum to its licensees, which are telecom service providers such as Reliance Jio Infocomm Ltd, Bharti Airtel Ltd and Vodafone Idea Ltd that can then choose to partner with vendors such as Nokia, Huawei, Ericsson, and Samsung.

Minister Prasad had also said that the UPI Payments interface has become a primary mean for all online money transactions in the country and it would soon be a global beacon for making Indian rupees much stronger.

The Lt. Governor of NCT of Delhi, Anil Baijal while addressing said that in the NCR Delhi itself the mobile theft cases are increasing to the tune of 40,000 cases per year and there should be a mechanism to address this problem. He requested the Minister for Communication to consider the integration of Zonal Integrated Police Network (ZIPNET) with the CEIR for better functioning.

The Secretary, Telecom and the Chairman, Digital Communications Commission, Anshu Prakash said that the Tele-density in the country has increased to 242 mobiles for 100 populations and the mobile handset became a means to fulfil all day-to-day requirements. Therefore, securing mobile with a system is the need of the hour.

International Mobile Equipment Identity (IMEI) is supposed to be a unique identity of a mobile phone device. A phone with one/two slots of SIM Card is programmed with one/two IMEI numbers as the case may be. IMEI number being programmable, some miscreants do reprogram the IMEI number, which results in the cloning of IMEI causing multiple devices with same IMEI number. As on date, there are many cases of clones/duplicated IMEI handsets in the network.

If such IMEI is blocked, a large number of mobile phones will get blocked being handsets with same IMEI causing inconvenience to many genuine customers. Thus, there is a need to eliminate duplicate/fake IMEI mobile phones from the network.

Accordingly, this project called Central Equipment Identity Register (CEIR) system has been undertaken by the DoT for addressing security, theft and other concerns including reprogramming of mobile handsets.

The launch of Project in Delhi will facilitate as follows:

Posted by: VoicenData Bureau
View more posts
Tags:5G
5G spectrum will be given for trial to all operators: Union Minister Ravi Shankar Prasad 0 out of 5 based on 0 ratings. 0 user reviews.
Sridhar Pinnapureddy is TiE Hyderabad’s new President
OPPO India to begin 2020 with a big bang! New sleek F series smartphone to be launched