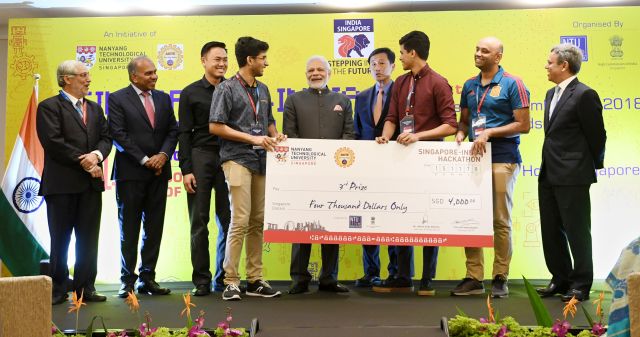 Talking about the power of fintech and the reach of digital connectivity, PM Modi says we are witnessing a digital revolution of unprecedented speed and scale.

At the Singapore Fintech Festival, PM Modi, said, “From desktop to cloud, from internet to social media, from IT Services to Internet of Things, India has come a long way in a short time. The character of the global economy is changing and technology is defining competitiveness and power in the new world. It is creating boundless opportunities to transform lives. I had said at the United Nations in 2014 that we have to believe that development and empowerment can spread with the same speed at which Facebook, Twitter or mobile phones have spread.”

In India, it has transformed governance and delivery of public services. It has unleashed innovation, hope and opportunities. It has empowered the weak and brought into mainstream those who were on the margins .It has made economic access more democratic.

PM Modi statistically quoted that financial inclusion has become a reality for 1.3 billion Indians. The government, he says, generated more than 1.2 billion biometric identities – called Aadhaar or foundation – in just a few years. With our Jan DhanYojana, we aimed to give a bank account to every Indian. In three years, the government has been instrumental to open 330 million new bank accounts. These are 330 million sources of identity, dignity and opportunities. PM Modi said banking has come to doorsteps even in remote villages through 400,000 micro ATMs based on Aadhaar.

Voicing his opinion further, The Prime Minister said, “This digital infrastructure has helped launch the world’s largest healthcare scheme this year. ‘Ayushman’ will provide affordable health insurance to 500 million Indians. Just a few weeks ago, we launched the India Post Payments Bank. Over 150 thousand post offices across India and 300,000 postal service employees are using technology to provide house-to-house banking. More than 120,000 village councils in India have already been connected by nearly 300,000 kilometers of fiber optic cables. Over 300,000 Common Service Centres have brought digital access to villages. They give our farmers better access to land records, credit, insurance, market, and the best price. They deliver health services and hygiene products to women. None of this would have been as effective without the other big change brought about by fintech – the digitization of payments and transactions in India. There is an explosion of fintech innovation and enterprise in India. It has turned India into a leading fintech and Startup nation in the world. The future of fintech and Industry 4.0 is emerging in India.”

PM Modi excitedly remarked that Indian youth are developing apps that are making the dream of paperless, cashless, presence-less, and yet safe and secure, transactions possible for all. That is the wonder of India Stack– simply the largest set of Application Programming Interface in the world. They are using Artificial Intelligence, Blockchain and machine learning to create solutions for banks, regulators and consumers. This enormous talent pool in India benefits from the ecosystem created by initiatives such as Digital India and Startup India, and by supportive policies, incentives and funding programs.

All this, he says has a direct impact on India being the largest data consumption in the world and the cheapest rates for data. And one of the top nations in fintech adoption is India and a preferred destination.

According to the Prime Minister, the Indian fintech scenario shows six great benefits: Access; inclusion; connectivity; ease of living; opportunity; and, accountability. He urged the fintech entrepreneurs to bring the unbanked 1.7 billion people in the world into the formal financial market and also exploit technology to use fintech tools to combat money laundering and other financial crimes.