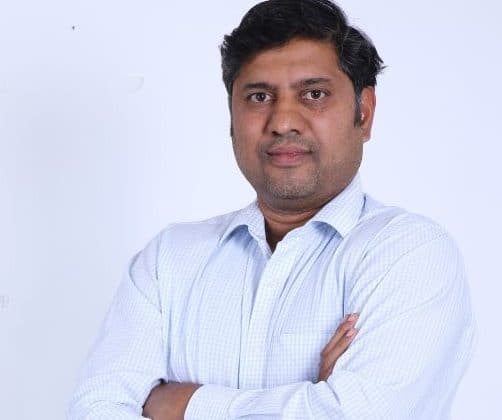 If we thought Indian telcos are just using imported chipsets, we might be proved wrong. Our own Bengaluru-based wireless communication and semiconductor solutions company Saankhya Labs is into developing next generation Broadcast, Broadband, Convergence, Satellite Communication and Cognitive Radio Access Network solutions based on its award-winning patented Software Defined Radio (SDR) chipsets and platforms.

Amidst presenting Saankhya’s niche solutions at international platforms, Parag Naik, co-Founder and CEO of Saankhya Labs, spent his valuable time for an email interaction with VoicenData. In the interaction Naik expresses all about Saankhya Labs and his desire to make it India’s semiconductor unicorn. Few excerpts:

VoicenData: To begin with, can VoicenData get an understanding of the inception of Saankhya Labs?

Parag Naik: Myself and my cofounders have been in the high-tech startup world since 2000 when we cofounded Smart Yantra Technologies (SYT). We built the world’s first OTT solution in India but did not know how to monetize it, as networks those days were not of high speed. SYT was then acquired by Genesis Microchip and after our lockin period, we founded Saankhya Labs in 2007. During the fag end of our lock-in period, myself and co-founders Vishwakumara Kayargadde and Hemant Mallapur were evaluating various options for the company.

The name “Saankhya” was first coined by my co-founder Dr. Vishwa. It means ‘Digital’ in Sanskrit.

One thing we were clear about is our mutual intention to build India’s first semiconductor product company. Saankhya Labs was thus formed after 6 months of deliberations. Our early employees were Anindya Saha, Sunil HR, and Abdul Aziz. Angel investor, Late SS Mahantshetti, was the first one who backed us. Our later Angel investors were truly angels and wrote out cheques for a crazy venture which was unheard of. In the initial years, the VC ecosystem in India treated us with derision. The journey was tough but soon we onboarded marquee investors like Intel Capital, General Motors and now Sinclair Broadcasting Group. The name “Saankhya” was first coined by my co-founder Dr. Vishwa. It means ‘Digital’ in Sanskrit.

VoicenData: Saankhya Labs claims to be the first developer of an electronic chipset that has various applications. Can you give an insight into it for our readers?

Parag Naik: Saankhya Labs is India’s first fabless semiconductor company for the wireless communication industry. At Saankhya, we developed the world’s first Software defined Radio (SDR) chipset that as the name suggests, can be used for multi-standard multi applications including broadcast, wireless broadband, and satellite communication applications. We have 30 international patents on the SDR architecture.

We decided to build an SDR platform, which is one of the most challenging technology problems. It needs knowledge of the entire gamut of electrical sciences from RF, communication DSP, and electronics, CPU/DSP architecture, and compilers. This was not attempted anywhere in the world and we are the first ones to build a consumer grade SDR. SDR has been in the military world for more than 3 decades before we came in. We chose to focus on a future proof architecture that could support all standards and applications. True to its nature, Saankhya has developed applications spanning broadcast, modems for rural broadband, satcom, military communications and now 5G.

What we refer to as 5G Broadcast is our patented technology that enables the convergence of Mobile Broadband and Broadcast Networks.

VoicenData: What is Saankhya’s 5G broadcast system and how are you revolutionizing the broadcast industry with the launch of the multi-standard next-generation TV system on the chip?

Parag Naik: What we refer to as 5G Broadcast is our patented technology that enables the convergence of Mobile Broadband and Broadcast Networks. This will not only revolutionize the Broadcast industry, but also the mobile networks. With the launch of our new chip, we enable the reception of the next generation of IP based digital Terrestrial TV reception directly on a mobile device. And also, our chip enables ‘cellularizing’ the Broadcast transmit systems, thus enabling a convergence of broadcast and broadband networks.

5G broadcast is not just for the reception of Linear TV directly on mobile, but it will also enable other applications such as OTT Video, IoT, Automotive Data including Firmware Upgrade over the air, Emergency alert systems, etc.

5G broadcast is not just for the reception of Linear TV directly on mobile, but it will also enable other applications such as OTT Video, IoT, Automotive Data including Firmware Upgrade over the air, Emergency alert systems, etc. With this, the Broadcaster can substantially increase their revenue as it gets into mobile devices, and the mobile operator gets almost an unlimited pipe to deliver broadcast content to their subscriber.

Saankhya provides an intelligent mechanism to offload video traffic (such as viral videos or live video) from the mobile network onto the broadcast network freeing up the mobile spectrum.

VoicenData: How is the broadband-broadcast convergence technology suited to eliminate call drops and improve call quality?

Parag Naik: The most constrained and precious part of the mobile network is the availability of spectrum, which determines the amount of bandwidth available for various kinds of data traffic. Today almost 70% of the bandwidth is consumed by video traffic which chokes the network. This leaves much lesser bandwidth available for other traffic including a voice in LTE network. With 5G broadcast (which is broadband-broadcast convergence), Saankhya provides an intelligent mechanism to offload video traffic (such as viral videos or live video) from the mobile network onto the broadcast network freeing up the mobile spectrum substantially and improving the call drop issues, etc.

VoicenData: How does Saankhya’s chipset separate video content from a mobile network in reducing the load on the spectrum.

Parag Naik: As I mentioned earlier, the main idea in 5G broadcast is to offload some of the viral content from the mobile network to broadcast network, which means that the receiver which is mobile handset, in this case, should have the ability to receive broadcast content. At Saankhya, we have developed a mobile optimized chip that enables a mobile phone to receive broadcast content. On the other end, at the broadcast transmitter side, we need to provide a ‘cellularized’ low power transmitter that is collocated with mobile base station for uniform coverage and be able to receive content in a mobile phone without roof top antenna (like in today’s case where a single high power transmitter for a region transmits and we need a roof top antenna to receive the signal).

Saankhya is also developing the network side of intelligent switching software that makes it a complete solution to offload data to the broadcast network.

A low power Broadcast Radio Head (BRH) uses Saankhya’s chip, that plugs the system. Saankhya is also developing the network side of intelligent switching software that makes it a complete solution to offload data to the broadcast network.

We want to be India’s first semiconductor unicorn from a revenue standpoint, not just valuations.

VoicenData: What are your future plans for Saankhya? How do you intend to steer the company ahead under the Made in India/Make in India plans?

Parag Naik: We want to be India’s first semiconductor unicorn from a revenue standpoint, not just valuations. We have now the right platform and partners to take our technology global. We have some essential patents for a 6G network that will hold us in good stead. We have a product and market mix that can take us to revenue of $1 bn in the next 5-6 years.

VoicenData: As a seasoned entrepreneur, you have been a witness to the evolution of the telecom industry and the technologies involved with the evolution. Can you give a gist of this evolution and its future?

Parag Naik: The industry has evolved from wireline to wireless on the access side. The wireless standards have gone from a few to about 10 standards. This is one compelling reason for us at Sannkhya to work on SDR technology.

On the access side as semiconductors get cheap there is a good chance of applying cognition. Current networks are static and deployed through a centralized body like the 3gpp. Future networks will be decentrailzed with a Machine Learning bot making decisions on the fly to optimize and bring dynamism to the networks. Saankhya is working on some of these technologies.

We are propounding an open and dynamic platform which we call as the ‘India Telecom Stack”.

The advent of SDN/NFV on the core will help a lot more startups to gain market share. In the semiconductor space, the modems are quasi-open. We are propounding an open and dynamic platform which we call as the ‘India Telecom Stack”. On the lines of the India stack, we believe that India can lead the world in 6G through this open and royalty free platform that will even out the playing field, thereby bringing much needed wider innovation from a large set of players.

Other innovations like the ‘virtualized core’ can change the core networks. IoT networks can take off on a massive scale in the future. Instead of bigger and fatter pipe, we as an industry should be concentrating on inclusivity and new business models for ubiquitous wireless connectivity.

5G to transform the technology, media and telecom landscape

Omdia released a new research paper connecting the dots between the strategies, technologies, companies and…