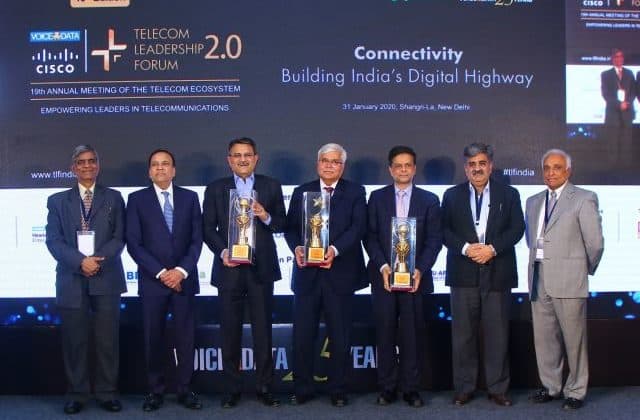 The award was conferred for the leadership and visionary role played by him during the extremely challenging time in the Indian telecom sector.

“His role as the regulator of the country’s telecom sector, and the balancing act in protecting both industry and consumer interest will go long way in synchronizing the aspirations, ambitions, and capabilities of the industry and the citizens of this country,” the Telecom Person of the Year citation stated.

“The Voice&Data Awards 2018 Jury was unanimous in its recognition of the ‘leading by example and tireless role’ that Manoj Kohli played in the formative stages of the Indian telecom industry, especially during the critical phase when the policy and market uncertainty challenges seemed to be insurmountable,” the citation of Life Lifetime Achievement Award for 2019 stated, adding that the award was conferred on him “for his stellar contribution to the Indian Telecom industry over its lifetime.”

The Pathbreaker of the Year Award for 2019 was an acknowledgment of the pioneering and path-breaking achievements in the Telecom industry achieved by Dr. Anand Agarwal and in the process transforming Sterlite Technologies—STL—from being an optical communication products company to becoming a data networks solutions provider. “Under his leadership, the company filed 271 patents during the year, the highest-ever in the company’s history in a single year.”

This is the 17th edition of the annual award instituted by Voice&Data in 2003 to recognize the leaders of the telecom industry in India, path-breaking initiatives, innovations, and technology breakthrough in the industry.

The decision was taken by a jury of eminent telecom professionals and experts headed by former Department of Telecom (DOT) Secretary Aruna Sundararajan who was conferred the Telecom Person of the Year award in 2018.

The awards were presented at the 25th Anniversary Celebration of Voice&Data and the 19th Telecom Leadership forum in New Delhi.

How to Make 5G Happen in India?

Though there’s too much hype around 5G, but what actually is required for 5G deployment…

Albeit, targeting the consumer remains the key always, but the initial business development takes place…