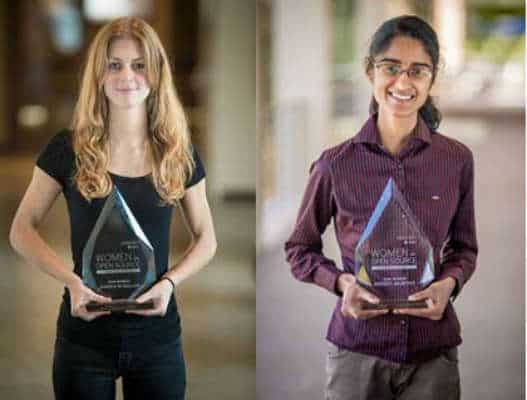 NEW DELHI:US-based software provider Red Hat has announced  Jessica McKellar, director of engineering and chief of staff to the vice president of engineering at Dropbox, and Preeti Murthy, a graduate student at Carnegie Mellon University, are the 2016 Women in Open Source Award winners. Both will be recognized today during the morning keynote activities at Red Hat Summit, which has been taking place in San Francisco this week.

Red Hat launched the Women in Open Source Awards in 2015 to honor women who make important contributions to open source projects and communities, or those making innovative use of open source methodology. Nominations for this year’s awards were accepted for two categories: academic (those currently enrolled in a college or university) and community (those working or volunteering on projects related to open source). Finalists were determined based on nomination criteria, with the public voting to determine the winners.

“McKellar, who was recognized in the community category, is the director of engineering and chief of staff to the vice president of engineering at Dropbox. She started contributing to open source as an intern at VMware before becoming a kernel engineer at Ksplice, and has been involved in open source software development for seven years. McKellar was a co-founder and vice president of engineering at Zulip, which was later acquired by Dropbox. She created an introduction to Python video course for O’Reilly Media, created and taught popular Boston Python workshops for women, and organized the world’s largest Python user group. McKellar delivered a keynote at PyCon 2014 on the importance of programming education for young children, and she ran a Python development sprint for new women contributors in San Francisco,” the statement said.

“Murthy, who was recognized in the academic category, has been an open source contributor for more than three years and is pursuing a master’s degree in electrical and computer engineering at Carnegie Mellon University. As an undergraduate, she worked on the Mono open source cross-compiler project as part of her thesis, and was actively involved in the Linux users group. Murthy joined IBM’s Linux Technology Center soon after earning her bachelor’s degree, where she worked for three years as a Linux kernel developer. Her contributions to the open source community include code, documentation, tutorials, open content, and other communication,” it added.

In addition to their technical contributions, both McKellar and Murthy have mentored and advocated for new open source contributors.

The winners will each receive a $2,500 stipend with suggested use to support open source projects or efforts. In addition, they will be featured on Opensource.com and given the opportunity to speak at a future Red Hat Women’s Leadership Community event.

“On behalf of Red Hat, I want to congratulate Jessica and Preeti on being recognized as 2016 Women in Open Source Award winners. Their contributions and dedication to open source are impactful and will be inspiring to future generations. I commend them both for their technical contributions and their outreach efforts,” said DeLisa Alexander, executive vice president and chief people officer, Red Hat.

“I’m so excited to be selected for this year’s Women in Open Source Award. I believe that open source is where the best and most exciting software development is taking place, and I’ll continue to share this belief with my peers. Thank you to Red Hat for this recognition,” said Preeti Murthy, master’s degree candidate, Carnegie Mellon University.