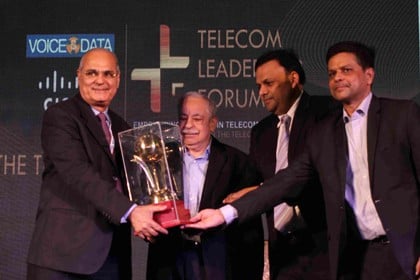 “The future is centered on data and not voice… Fair comparison (among players) would happen when everybody starts charging the customer… eventually prices would fall rather than rise.” —Anil Tandan, Voice&Data Telecom CTO of the Year 2016

The CTO’s role in the telecom industry is complex and weighty. It directly relates to strategy, growth, and customer satisfaction. One of the most important aspects of the CTO role is to advise business on spectrum roadmaps by giving technical inputs to the business for spectrum auction. “Spectrum is the raw material in the mobile services business so the CTO has to identify and recommend the good spectrum, create the right ecosystem around it, see which are the spectrums used globally and place the right bets that will ensure growth for the company. The CTO also must place the correct bets, well informed nonetheless, on which technology to go in for, such 3G or 4G, and the right time to introduce them in the market,” says Tandan.

Interestingly, the 3G and 4G auctions in India happened at the same time in 2010, compared to nowhere else in the world. Even then not much happened for some years after that. Things started happening only around 2015-16. The right time also depends on the readiness of the customer and the development of the ecosystem.

Tandan says that Idea Cellular is well-placed in terms of spectrum acquisitions following the 2016 auctions. Idea has 4G FDD spectrum in 20 Circles which include 16 Circles with TDD spectrum also. 15 Circles for 3G with U900 second carrier in 2 Circles. For its leadership circles, it also has seven circles with 10Mhz of contiguous 1800 MHz spectrum. In 2015, when the 900 MHz spectrum renewal happened, Idea bought additional 900 MHz, though it was heavily priced. There was a well thought out reason: the intent was to launch a second carrier for 3G in places such as Maharashtra and MP (where they already had 2100 MHz) since 900 MHz gives better in-building coverage. Tandan’s team did minor tweaks in GSM by dialing down the UMTS from 5 MHz to 4.2 MHz, without any reduction in customer experience.

The Backhaul & the Network

As you get into more data, the backhaul becomes more important. It is also the most difficult and time-consuming part to implement. Idea’s backend is as good as Airtel and Vodafone if not more, claims Tandan. We have also done a lot of sharing and joint rollouts to keep costs low, he adds.

For the backhaul, Idea was the pioneer in introducing OTN (optical transfer network) almost four years back. About 24 months back, Idea also implemented the 100Ghz ASON (automatic switched optical network). Idea was also one of the first to introduce 3G-4G synchronization.

The other important part of what Idea did was the use of UWB (ultra wideband) radio. Explains Tandan, “This is very useful for us in certain cases. For example, in the Rajasthan circle and Bihar circle, we have won both 1800 MHz and 2100 MHz spectrum. So, if we want to roll out both 2G and 3G simultaneously, we would have needed separate radios. The UWB radio is a single radio that covers both and we would start the rollout next month.” Idea is the only company to use UWB radio as of now. The technology costs less and is far more convenient to roll out. In the future, Idea sees the possibility of using UWB radio to bring together 2300 MHz and 2500 MHz spectrums.

Still, the year 2016 would be mostly remembered as the year of call-drops. Early in the year, there was a huge outcry about call drops. Says Tandan, “The issue of call drops was partly about perception and partly about reality. But we had to sort the problem. In my view, one of the key reasons for call drops were the switch over to a new spectrum done by few service providers in the metros during December 2014 and January 2015.” Added to that was the issue of site availability especially in places like Lutyens Delhi, South Mumbai, and areas around defense establishments.

Idea used a combination of measures to manage call drops. The company formed a strong team to focus on quality. The team did some common-sense things like the drive test to identify areas with weak coverage. Interestingly, at many of these areas call drops were a recurrent feature at specific spots or sites. The remedy was to build new sites at these places. There were also cases where cell sites were down because of loss of power. In such cases, Idea reworked their agreement with the site service provider or tower company for stricter SLAs regarding power outage. Tandan also counts on help from the government for allowing COWs (cell-on-wheels) in areas such as defense establishments, especially in cities like Delhi and Pune where the cantonment areas are within the city. In such cities, discontinuities in cell connectivity could prove costly for service providers.

Gearing Up to the Data Opportunity

For a long time, mobile services have been largely focused on voice, but that’s changed now. The biggest change in the telecom industry is about the shift to data, data becoming mainstream. Tandan says that although the shift started in 2011 with the launch of 3G, it is only in 2016 that the move started gathering momentum, primarily due to the mass availability of low cost smartphones and expansion of the network.

Also, the entry of Jio, which is a new player that is primarily focused on data with voice coming in as an add-on has accelerated the move towards data. Says Tandan, “The future is centered on data and not voice. But it is too premature to decide the winner because when someone is offering something for free, it is not steady state. Fair comparison would happen when everybody starts charging the customer. But eventually prices would fall rather than rise.”

The good part is that the current context has made people experience data and it will open out the market for data and all operators would stand to gain in the long term. As the CTO, Tandan is deeply focused on taking Idea to the top slot in data. He appreciates that the demands of the data-driven mobile services market are far different. The predominant question is— How do we build better data experience? Answering this question requires work at all levels; it is not only about the network but also about developing the right ecosystem of content and community providers.

As the CTO, Tandan has set to work on the most critical piece of the whole game: customer experience management. Idea has just embarked on the journey and signed on a vendor to deliver a whole suite of solutions in customer experience management (CEM). While Tandan and his team have been evaluating and studying the options for more than two-and-a-half years now, the company placed the order just only four months back. This is because the area is rapidly evolving and placing the bets on something old would make one redundant soon, Tandan says. The solution feeds or draws data from the network as well as the radio system and gives customer level information at the deepest level.

Tandan feels that CEM is not a technology-driven project alone; it needs adequate stakeholding by business teams, especially service delivery and marketing. The CEM when operational would help the company transition from tracking key performance indicators to quality indicators to arriving at a subscriber experience index.

On the network front, Tandan feels that Idea’s 4G rollout has been the most extensive and they are poised for any competitive response. The company has been building out other areas of the digital ecosystem such as getting ready for cashless society, customer self-service, digital content. A separate business unit headed by a C-level executive focused on digital vertical has been created, Tandan said.