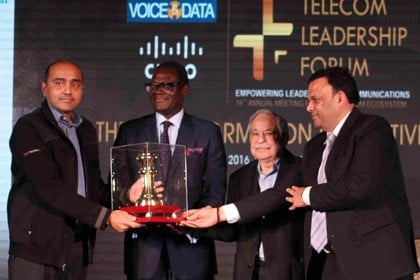 Gopal Vittal is Voice&Data Person of the Year 2016

Year 2016 was Airtel’s Year all the way. At the helm, apart from Sunil Mittal whose rise in India telecom is legendary, there is Gopal Vittal, the man Mittal hired as CEO in 2013 and tasked him with leading Bharti Airtel through the data boom.

Vittal had demonstrated his mettle in 2006-2008 as head of marketing at Bharti aligning the company in India with market demand  and building consumer connect, at a time when Bharti was scaling up operations to reach B, C cites and beyond. An alumnus of IIM-Kolkata, hired by Hindustan Unilever (HUL) in 1990 soon after graduating, Vittal had for training ground, one of the world’s best and, India’s largest FMCG company where he was involved in scaling and building outreach to rural areas for Hindustan Unilever products. During 2008-2012, he built a great track record for himself at HUL heading the MNC’s home and personal care business.

By the time his ACT II as CEO at Bharti Airtel began in 2013 the telecom industry has been through the voice-led growth spurt and was baying for its next growth spurt, this time around led by data. Besides, the market complexion had changed with increased competition and news of an impending entry of another player of reckoning in the market.

Three years later, in December 2016, Bharti Airtel continues to lead the India telecom industry. Under Vittal’s leadership, Airtel has made rapid strides in the emerging 4G LTE segment in India.

In FY 2016, the telco gave itself some potent shots in the arm in an obvious strategy aimed to up the ante for the competition, and to stay ahead of the pack. It worked to fill various key gaps and bolstered capabilities on multiple fronts.

The first major move came when the Gopal Vittal-led Bharti Airtel decided to aggressively ramp up its pan-India 4G presence even as the efforts to grow its 3G base continued. It launched 4G in close to 300 cities across India in August 2015 and kept adding new locations throughout the year. The service was understood to be available in over 500 cities across 15 circles by the end of the fiscal 2016.

The telecom major also grew conscious of a growing need to augment its 4G presence beyond 15 circles, so as to counter any perceptions around its 4G capabilities vis-à-vis the competition in general and the greenfield 4G major Reliance Jio Infocomm in particular.

Airtel took the merger & acquisitions-cum-spectrum-trading route to expand its 4G presence, and entered into a series of deals for the purpose. First, in December 2015, it acquired Augere Wireless and gained access to 20 MHz of TD LTE spectrum in the Madhya Pradesh circle. Next, in March 2016, it bought out Videocon Telecom’s spectrum assets in the 1800 MHz band for the six circles of Bihar, Haryana, Madhya Pradesh, Uttar Pradesh (East), UP (West) and Gujarat. Then in April 2016, just after the close of the FY 2015-16, it clinched a spectrum trading deal with Aircel for eight more circles of Tamil Nadu (including Chennai), Bihar, J&K, West Bengal, Assam, North East, Andhra Pradesh and Orissa. The three deals together, despite some overlapping circles, extended Airtel’s 4G LTE presence to all the 22 telecom circles, with a mix of 1800 MHz and 2300 MHz bands.

This made it the only commercially live pan-India operator to have 4G spectrum for all circles, until Reliance Jio Infocomm announced its commercial launch in September 2016.

During the fiscal 2016, Airtel’s revenue growth was indeed fueled by data revenue growth, which was amply reflected in the growing data ARPUs. Monthly data ARPU went up from Rs 181 in the first quarter of FY 2016 to Rs 200 in the third quarter. However, the fourth quarter witnessed a small decline and clocked a monthly data ARPU of Rs 196.

The management at Airtel it appears had envisaged a slowing growth in data revenue on anvil, and were working on a Rs 60,000 crore network transformation plan with a potential to massify data usage across its subscriber segments and circles. The spend spread over a period of three years is over and above the Rs 1.6 lakh crore that Airtel has already invested so far. The program, named Project Leap, aimed to add a whopping 70,000 base stations within the fiscal 2016, among various other things.

Airtel also became the first operator in the country to commercially deploy LTE-Advanced during the FY 2016, with Kerala becoming the first circle to feature the technology. Notably, LTE-A makes it possible to aggregate smaller spectrum capacities different frequency sets, such as 1800 MHz and 2300 MHz, into one wider band for the end users, provided they are wielding LTE-A handsets.

Forced to compete on tariff, Vittal now has no choice but to take Reliance Jio head on in the battle for consumers. Matching steps with Jio, Airtel in 2017 has announced its offer of free data (worth Rs 9,000) for 12 months to customers who switch to Airtel 4G. The 12 months offer is available to any customer with a 4G mobile handset, and who is currently not on the Airtel network. Any customer, including existing Airtel customers, upgrading to a new 4G handset can also avail this offer. The offer will be available to customers across India until February 28, 2017.

Competition is set to get hotter with disruption across sectors playing a role. Airtel, it is said, is also holding talks to acquire Telenor 4G spectrum, as the Norwegian telco looks to exit India market. Vittal and Airtel Management are in the fray to defend Airtel’s spot as a market leader and chart the next phase of growth in Indian telecom — even as India’s No 1 telco Airtel continues to buy time to put itself on firmer ground — and transform into a shape-shifting digital service provider to serve the emerging market demand. There won’t be a dull moment for Vittal in 2017.